The entire wristwatch history since the 19th century

The History of Wristwatches

The wristwatch history started hundreds of years ago. In European latitudes, the height of the sun has long been sufficient to determine the time of day. The first sundials were designed by the Egyptians. The idea came to Rome after crossing Greece: the oldest Roman sundial, installed in the 3rd century BC. J.C., was booty taken from the Greeks. It delayed for 100 years, until it was noticed that it was indicating the wrong time.

Are you wondering when was the first wristwatch invented?

The appearance of modern watches reveals the outward appearance of old sundials: the round disc has become the dial and the fine shadow that gave the time has given way to the hand.

Between the two, however, clepsydra or water clocks also made their appearance. They measured the time in relation to the level of the water contained in the bowl, thanks to the regular flow of the liquid. In the third century BC. J.C., Ctesibios, a Greek hairdresser, had already built a clepsydra with a dial and a needle. In Socrates' time, water clocks were used in courts to shorten the speaking time of overly boring speakers. 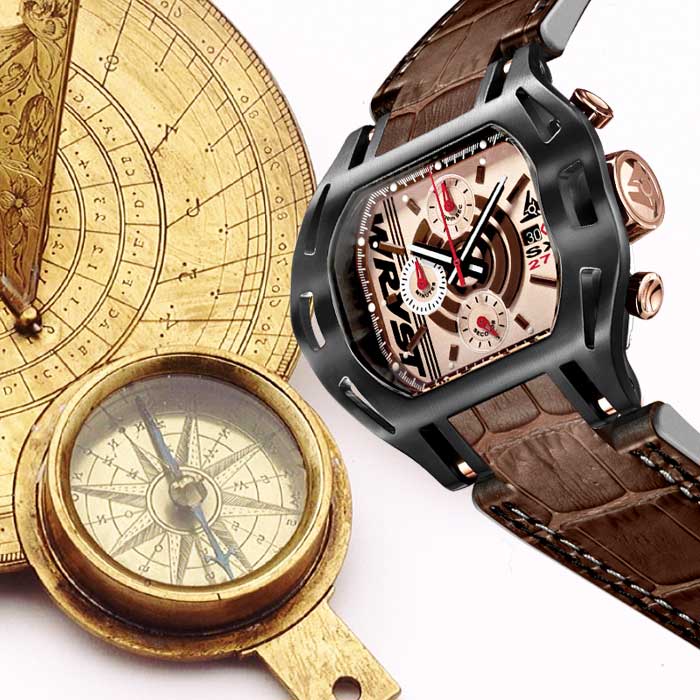 Neither the idea of ​​designing a portable time measuring instrument, the precursor of the wristwatch, nor even the phenomenon is new: in ancient Rome, there were already small portable sundials.

In Germany, it was mainly the monasteries that were interested in perfectly functioning clocks. The Benedictine Hildemar even declared that “no prayer can be reasonable if it is not precisely regulated". The candle clock was invented in England in the tenth century: a candle indicated the time by being consumed.

The first mechanical clock was built around the 10th century and was driven by stone weights. But it was not until the 12th century that the builders of astronomical instruments made the first usable cog clocks. It was around this time that the word "watchmaker" appeared, denoting the profession.

Watchmaking technique also developed in Asia. The Chi hois had since the Middle Ages water clocks which functioned satisfactorily. In the 6th century, they were already supplying these instruments to Japan.

The construction of clocks already involves knowing and understanding certain notions about time. What is a die? What is a minute? However, these are Western temporal motions. In Asia, another system was in force for a long time. Indeed, night and day were each divided into six sections. In summer, the days were longer, and consequently the segments of the day too; conversely, in winter they were shorter. The horrors required to indicate this phenomenon were complex works of art.

In Europe, the much simpler 24-hour day was in shape and with it the 12-hour clock was also uncomplicated. Initially, it was enough to animate a wheel which turned without stopping twice a day around its axis to tell the time. Putting the wheel in motion was not difficult: it was enough to wind a weight attached to a cord wrapped around the axis of the wheel. The problem was to brake the system so that it did not unroll suddenly.

In the thirteenth century, monumental mechanical clocks made their appearance in Europe, then in the fourteenth century astronomical clocks for large churches. Dante also described one of his hor Oges around 1320 in the Divine Comedy. It was therefore more and more common practice to equip church steeples with clocks, most of them bearing a chime, not only to indicate the time of the village but above all to indicate with precision the time of religious services.

These clocks, animated by weights, worked amazingly precisely. Unfortunately, we do not know exactly how the first watchmakers succeeded in braking their clocks with friction escapements so that they had a stable operation (which would later be achieved by the balance wheel and modern escapements).

The pendulum was invented in the 16th century by Galileo Galileo Galilei, but it was perfected by the astronomer Christian Huygens who filed a patent application. Since then, he has been wrongly credited with the invention of the pendulum. The idea is brilliant: the pendulum oscillates and it is only with each tick or tock that the gear of the clock can turn one more notch.

The beginnings of watch production

In the 16th century, a renowned watchmaking craft gradually emerged in Central and Western Europe. In Germany, its centers were Augsburg and Nuremberg, in Switzerland, Geneva, and in England, London. The Thirty Years' War, however, caused Germany to fall considerably behind. Switzerland and England then took the lead in nascent watchmaking production.

However, at the end of the war, a new German watchmaking center developed in the Black Forest, near Lake Titisee, notably with the manufacture, in 1640, of a first wooden clock. On many farms in the Black Forest, skillful peasants built clocks, taking advantage of the long winter months to earn some money. In 1850, a Grand Ducal school of clockmaking was even created in the town of Furtwangen.

The creations of the talented craftsmen of large clocks were soon taken up in a smaller format. The massive pocket clocks called "Nuremberg Eggs" were already famous in the sixteenth century.

Technical discoveries such as the tensioned steel spring as a source of energy have been used since the end of the 15th century, the beginning of the 16th century. These discoveries made it possible to manufacture smaller and more portable clocks.

The development of these small 16th-century oval clocks, the Nuremberg Eggs, using a known spring mechanism, was admittedly attributed to the Nuremberg clockmaker Peter Henlein (c. 1479-1542), but their manufacture could not really be completed until mid-16th century, after his death. The invention of the pocket watch cannot therefore be really credited to Henlein.

At that time, Switzerland already had many very experienced watchmakers. In the villages of the Swiss Jura located between Geneva and Basel, a real hub of Swiss watchmaking developed and the town of La Chaux-de-Fonds became the center of the country's watch production.

On the high seas, we needed chronometers to guarantee the safety of navigation. It seems obvious that England, a great maritime power, actively encouraged the nascent watchmaking production and exercised a hegemony in this field. In the 16th century, the English ceded their supremacy in the production of small clocks to the Swiss. The country then had more watch factories than England. Germany was not left out either. In 1767, Margrave Charles Frederick of Baden set out to launch the jewelry and watchmaking industry in Pforzheim, Germany. He therefore founded a watch factory in the orphanage in Pforzheim. However, this city did not really succeed in establishing itself in the watchmaking market until the 20th century.

In the 19th century, the clockmaker Ferdinand Adolph Lange (1815-1875) succeeded in building a watch industry in the town of Glashütte thanks to his skill in business and the targeted support of the poor townspeople.

However, industrial production of portable clocks did not really begin until the 19th century. There was already a kind of wristwatch, but it was not produced in series. These early wristwatches served as jewelry and had only an ornamental role like bracelets, or they were simply hung from a chain on the wrist. The cases were round or oval and the mechanism was wound up using small keys.

The first real wristwatches appeared in 1880. The German navy ordered them from the Swiss manufacturer Girard-Perregaux. At the same time, ladies' wristwatches had also developed in Switzerland and were very successful, especially among American women.

Various wristwatch patents were filed, designed only to be worn on the wrist, as a few far-sighted manufacturers, such as the Swiss brand Eterna in 1909, recognized the economic potential of this type of watch. Hans Wilsdorf was one of the forerunners. He had left Kulmbach and Bavaria to sell clocks in London. He then bet on wristwatches and, in 1908, he was already selling a considerable number under the name "Rolex". He first bought his movements in Switzerland, then moved to Geneva shortly after to found his own watch factory. He was the first to obtain chronometer certificates for his achievements, which is almost sensational for these little clocks.

Today, Wilsdorf is considered the rightful father of wristwatch chronometers. Many wristwatches already had in addition to the hands indicating the hours and minutes, a second hand for the seconds, either central or on a small dial, called today in most cases "small seconds".

The first wristwatch chronographs appeared around 1919. In the United States, attractive wristwatches were already being offered around 1913. In addition, during World War I, wristwatches were indispensable companions for soldiers at the front. The Swiss watch companies were the quickest to react to the sharp increase in demand at the end of the war. 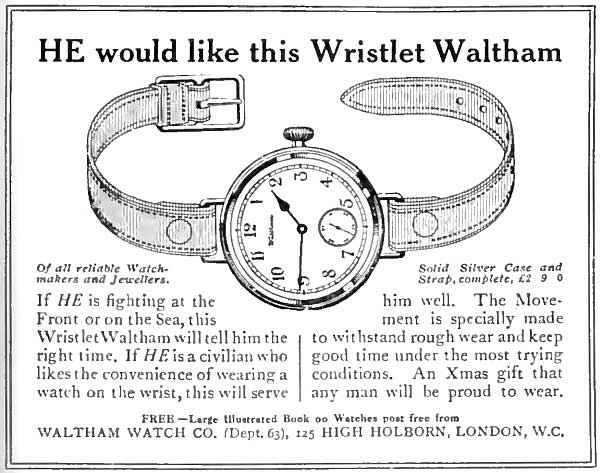 The appearance of wristwatches changed in the 1920s

If they still recalled at the beginning the pocket watch, new artistic creations, sometimes original were imagined rotating scales in the place of the hands, dials raised in the middle, indication of the phases of the Moon and various other details came to enrich the dial. The design included almost all of the elements that are still found today.

Over time, the movements became more and more complex. The watchmakers who were entrusted with wristwatches to clean, check or repair them were increasingly in demand. When, in the 1970s, the quartz watch took hold of the market, it sparked a great deal of controversy. Many watchmakers profited from the sale of this new generation of less complicated, less expensive and often more precise watches, while others preferred to continue to devote themselves exclusively to the mechanical wristwatch, carefully made by hand.

Finally a page where you can find a brief history of the wristwatch without all the technical fuss. Great read and thank you for using simple words easy to understand without any knowledge. Nice post ????